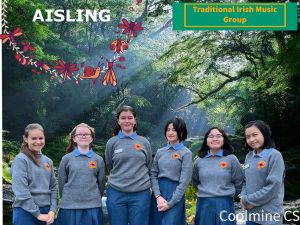 The corridors of Coolmine Community School are once again resonating with the sounds of Irish Traditional Music. A new music sensation – Irish Group ‘Aisling’ has been formed from our super talented first and second year students to entertain us with a wide repertoire of Irish jigs, reels, hornpipes, airs and song ballads. The group are really looking forward to performing at future school events.

The group members of Aisling are as follows:

Martina has loved music ever since she can remember. She recently told me, ‘my mum bought me maracas when I was one. Then more instruments followed: a whistle, a small keyboard, a drum and a mouth harmonica. I realised that I wanted to play a musical instrument when I was in senior infants. My teacher, Ms. O’Connor could play on multiple musical instruments and I was fascinated by her ‘big red box’ as she referred to her piano accordion. I used to ask her how I could start learning to play the piano accordion. I began to play on the tin whistle in first class when I attended Ms. O’Connor’s classes. I learned all the music notes and how to stay in rhythm with her and with my mum’s help. It wasn’t easy, but my passion for music kept me going forward. In third class, I finally got my beloved piano accordion for Christmas. Ms. O’Connor taught me the basics.

Ms. O’Connor set up a school band in fourth class. We played at various school events such as the celebrations of St. Brigid’s Day, St. Patrick’s Day, Seachtain na Gaeilge, communions, confirmations and Intercultural Day. We also welcomed the Dublin GAA team. In the beginning of 6th class, I got a new teacher. His name was Gareth. He helped me develop my accordion skills even further. Cathal, the teacher I have now is helping me to improve my bass playing, including the rehearsals I am attending with ‘Aisling’. Music still plays a major part in my life and I hope my passion will help me succeed in my future career.’

Hi! This is Audrey, traditional Irish musician! In terms of traditional Irish instruments, I play tin whistle and concertina. I started playing tin whistle in first class in Scoil Bhríde Cailíní. My teacher was Ms O’Connor. I started off playing tunes such as Hot Cross Buns and eventually learned tunes like Sally Gardens and Edelweiss. After a few years, I eventually played during the St. Patrick’s Day Parade in Blanchardstown and the Fleadh Cheoil. Now I play tunes such as the Teetotaller and the Sally Gardens Reel! I picked up concertina last year. Now, I play in the band Aisling!

Hello, I’m Julie Anne and I started playing music when I was 5 years old. I started music in my primary school, Scoil Bhríde Cailíní, where I was taught by my first music teacher, Ms. O’ Connor. I started out on the tin whistle and I have been playing it for around 7 years now.

I was nine years old when I picked up the low whistle. The low whistle is a more niche instrument, its sound resembles a flute, though it’s not a flute. It is a larger tin whistle that is much lower in pitch than the normal penny whistle. I bought it in Waltons. It was a polymer, Tony Dixon low whistle. I taught myself how to play it, and I’ve been playing low whistle since 2018, nearly three years! After this, I started learning button accordion, my third instrument. I also love playing this instrument. I am looking forward to playing with our school group. And that is my music journey (so far).

I started playing the tin whistle when I was only six years old I attended lessons at my primary school,  Scoil Bhríde Cailíní, for one hour after school every Tuesday. Many others attended these lessons including Audrey Pahati, Julie-Anne Vega and Martina Neumannova. We learnt many musical things. The music group and two other classes went to the Blanchardstown Shopping Centre at Christmas to perform Christmas songs to raise money for charity. I have also gone to the Fleadh Cheoil, which is an Irish Music competition. When I performed at the Fleadh, I performed with the Irish Traditional Group called ‘Craobh Slí Dhála CCÉ’ http://craobhslidhala.ie/about . I have also performed at Luttrellstown Castle with this group. Overall I have been playing the tin whistle for about 7 years. I really enjoy playing music and I think our school group ‘Aisling’ will have great success.

My journey to where I am now with ‘Aisling’ is a short one. I always had an interest in music and the idea of playing a musical instrument was fascinating to me. I went to a different primary school than the other girls and I have only met them all when I joined Coolmine.

When I was in third class we started learning how to play the tin whistle and how to play a few songs on it, but after all of that I never went ahead to learn how to use it properly as I hated the sound it made when it wasn’t played properly. When I joined Coolmine I made friends with two of the girls that are in the music group who are also in my class and I learnt about the traditional Irish group ‘Aisling’ from them. I was interested in this and I wanted to join, mainly for my enjoyment and to learn something new, something that I wanted to do for a while but never really achieved. Here I am now, a part of the group, playing with my friends and having a wonderful time.

We are all so looking forward to the bright future of these young musicians.