After a solid 48-34 victory over Ardscoil Rís in the semi final on Tuesday 20th March 2018, the second year boys basketball team travelled to Oblate Hall on Wednesday 21st March 2018 to play in the final against Moyle Park.

Coolmine CS came home champions following a 52-39 victory over Moyle Park. They are now the top team in the A League of this region.

The team will now continue the quest for glory into the All Ireland after Easter! 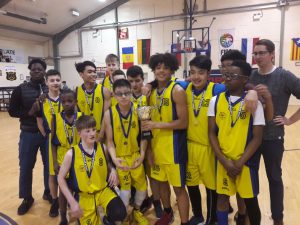