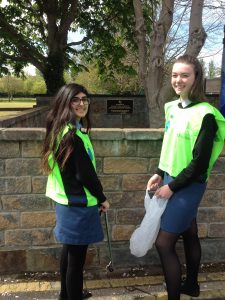 Coolmine Litter Awareness Week ran from April 24th to 28th 2017. Its purpose was to tackle litter on the school grounds and in the locality.

A raffle was run to reward students who put their rubbish in the right bin and, as part of the National Spring Clean, Mr Kinlon’s TY horticulture group carried out a clean-up in Coolmine Woods (eight bags of rubbish were collected by the students and removed by Fingal County Council).

This work contributed to Coolmine earning the Neat Streets certificate and will help to support an application for a Green Flag in the next school year.