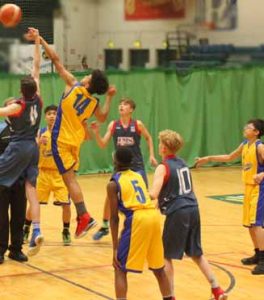 Coolmine Community School First Year Boys Basketball team, clinched the All-Ireland B School’s League title in dramatic style, in the dying minutes of the final against Patrician Academy Mallow, in the National Basketball Arena in Tallaght on 4th May.

From the end of the first quarter the teams were level and it was evident that this would be a closely contested game. Both teams had won their semi-final games by comfortable margins. Coolmine won their game against Kinsale Community School, 40 to 30 and Patrician Academy won their game against Colaiste Choilmcille Ballyshannon 61 to 29.

Patrician Academy edged ahead in the second and third quarters of the final and by the middle of the third quarter had a 7 point lead. After a crucial time out call by Coolmine CS and a key substitution, Coolmine CS began to turn the tide. With a number of rapid baskets from P.J. Akinnuoye and powerful drives from James Capellan and Leinster Gomez, Coolmine drew level and then edged ahead.

With the team’s only one basket apart, the final time out of the game was called with 45 seconds remaining in the game. Coolmine managed to hold possession for the final seconds of the game and claimed victory in the end.

The Coolmine CS team Captain, Leinster Gomez lifted the cup following in footsteps of his older brother Louis, who captained the Coolmine Community School team to All Ireland Victory in 2012.