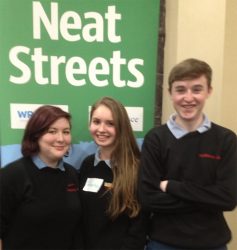 Three fifth year students attended the Neat Streets conference in the Radisson Blu hotel in Dublin 8 on Tuesday 17th January. The Neat Streets programme is an anti-litter & waste campaign  run within secondary schools across the Republic of Ireland. The conference was facilitated by An Taisce and focussed on bringing students and teachers together from schools nationwide to discuss how to implement the Neat Streets programme, develop actions and overcome challenges . Students discussed and debated litter and waste issues and took part in workshop on designing an anti-litter campaign.