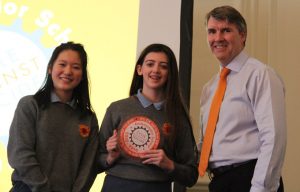 On Friday 23rd September, the now annual Cycle Against Suicide Ambassador School Awards ceremony was held at the Royal Hospital, Kilmainham. These awards recognised the immense efforts of 83 schools around the island of Ireland who have completed the Ambassador School Programme, and become actively involved in mental health promotion. The Ambassador School Programme, one aspect of a wide range of Cycle Against Suicide initiatives, is school-led, and involves the completion of “Five Gears” over the course of a year, all of which are aimed at raising awareness of the message that “It’s OK not to feel OK; and it’s absolutely OK to ask for help”.