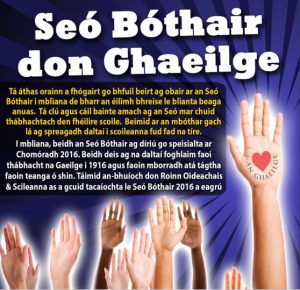 The road show was conducted completely through Irish and was attended by 2 O’Dálaigh and Ms Peavoy’s 5ú Bliain class.

The Road Show focused on the commemoration of 1916. The Irish language was central to the vision of the leaders of the 1916 Rising. In fact, all seven signatories of the Proclamation were involved in Conradh na Gaeilge at the time. Students were given the opportunity to learn about the importance of the language in 1916 and its advancements since then.

Students were also given an insight into career paths that require that use of the Irish Language as well as be informed about possible work experience opportunities.

The workshop lasted an hour and all students found it enjoyable and informative.