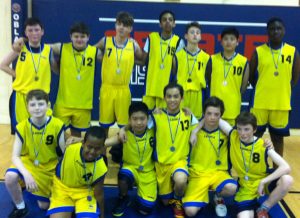 Well done to the first and second year boys’ basketball teams on making it to the final of the Dublin Plate. The games were played in the Oblate Hall in Inchicore on Friday 15th April. The first year team played Marian College in their final. Coolmine dominated the first half of the game, but Marian college pushed ahead in the final quarters.

The second year team played Rathcoole in their final. The Coolmine team played very well and were ahead going into the final quarter of the game. Despite some excellent baskets from Coolmine including a number of three pointers, Rathcoole managed to edge ahead in the final minutes of the game. In the end Coolmine were narrowly defeated by one basket.

Although a double defeat was hard to take on the day, it was a great achievement for both teams to make it to the final. Coolmine will no doubt be back next year to contest the Dublin finals again.