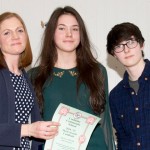 The awards acknowledge the achievements of students throughout the year in a broad range of areas such as:

Click here to see some more photos from the night.